These are our essays from this past Sunday.

END_OF_DOCUMENT_TOKEN_TO_BE_REPLACED

This past Wednesday we had a rather lively discussion on the notion of visions in Christianity – visions of Mary for Catholics and just general visions by Pentecostals or other generally charismatic sects.  It’s quite interesting that the Mother Mary almost never (to my knowledge) appears to Protestants – visions of Mary almost always occur to poor girls in small villages that are going through war or political strife.  For Protestants, claims of visions or other prophetic utterances seem to be hit or miss according to the limited experiences we discuss from our own personal encounters.

There was also some discussion on whether or not missions (in general throughout history) isn’t a form of Western imperialization in some respects.  We tend to go there and not only want to preach the gospel to them, but also hope and pray that they’ll receive the same benefits and even the comforts of an affluent Western lifestyle.  Has the Western mindset of the gospel been diluted and mixed with the gospel of Western standard of living and materialism?  There was also some thoughts as to whether or not Marcion was right in stating that the God of the Old Testament and the God of the New Testament are NOT one and the same.  Christianity has moved so far away from Judaism and its understanding of God that when you compare the two, they seem worlds apart.  It is arguable, but it’s an interesting thought nonetheless.

Here are our submissions from our meeting this Wednesday.

“Liberty Leading the People”, Eugene Delacroix, 1830 It commemorated the July Revolution of 1830 which toppled King Charles X of France. A woman personifying Liberty leads the people forward over the bodies of the fallen, holding the flag of the French Revolution – the tricolor flag which is still France’s flag today.

For our next meeting, we will be concluding our survey of the Enlightenment period by reading the last two sections of Chapter 21: The French Revolution (1789 – 1815) and Aftermath of Revolution: A Europe of Nation-States.

We’ve come a long way in our study of Christian history.  Starting with the seeds of Western Civilization in ancient Greece, to the humble beginnings of the ministry of Jesus of Nazareth, the growth of the Church in Roman times, through the Middle Ages, the rise of the Catholic Church and the Christian Empire, the spread of Orthodox Christianity, the impact of the Reformation, the spread of Christianity throughout the entire world in Europe, Africa, Russia, Asia, and to North and South Americas, and now we come into the origins of the modern world we live in today starting with the Enlightenment period.  Christianity and her Church have come a long way and have been through much change to say the very least.

END_OF_DOCUMENT_TOKEN_TO_BE_REPLACED

Today marks the anniversary of St. Augustine’s death in 430 AD.

Relevant magazine has listed 15 of Augustine’s most influential quotes in their opinion here.

My personal favorite is:

If you believe what you like in the gospels, and reject what you don’t like, it is not the gospel you believe, but yourself. – Sermons

Our essays are here.

END_OF_DOCUMENT_TOKEN_TO_BE_REPLACED 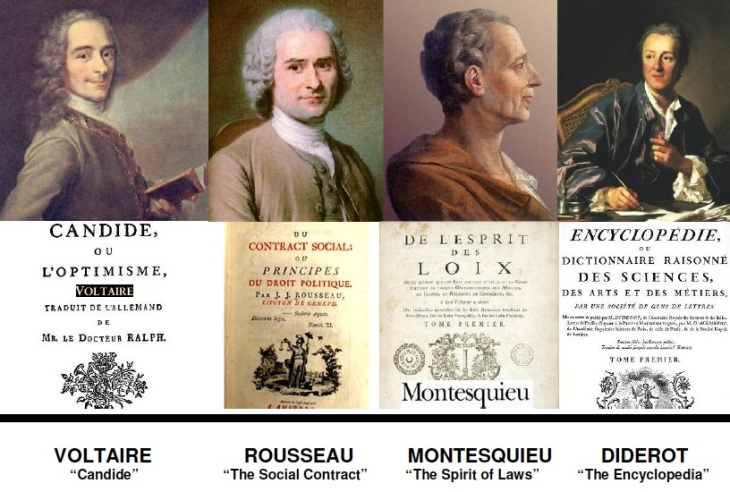 For our next meeting on Tuesday, August 26, please read the next three sections of Chapter 21: Social Watersheds in the Netherlands and England (1650 – 1750), Gender Roles in the Enlightenment, and Enlightenment in the Eighteenth Century.

END_OF_DOCUMENT_TOKEN_TO_BE_REPLACED

Benoît Louis Prévost, An engraving from the 1772 edition of the “Encyclopédie”. Truth, in the top center, is surrounded by light and unveiled by the figures to the right, Philosophy and Reason.

Today we delve into the first part of a series of studies on the Age of Enlightenment and its effects on Christianity.

Here, we delve into challenges to the authority of the Church and the Bible, the philosophy of Baruch de Spinoza, and the aftermath that the 1492 Expulsion of the Jews in Spain and Portugal had in fostering religious skepticism and doubt.

“A Philosopher lecturing with a Mechanical Planetary” by Joseph Wright, 1766

We will be having our next meeting on Tuesday, August 12.

I know some are really excited to read this part of history and the importance of the Enlightenment, so it should be fertile ground for some interesting discussions and insights in the upcoming weeks ahead.  Really looking forward to our discussions.

Here are our essays for Chapter 19.

Christianity goes global, to the South and Central Americas and all the way to Japan.

And of course, a lot of bloodshed and death on both sides – for the native populations as well as persecutions for Christians.

A great movie to watch about the missionary activities of the Jesuits in South America was “The Mission” starring Jeremy Irons and Robert De Niro.